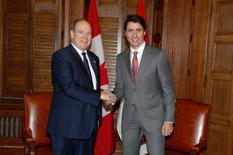 H.S.H. the Sovereign Prince met Canadian Prime Minister Justin Trudeau for the first time at the Parliament Buildings in Ottawa on Monday 7 May 2018 during a visit to Canada’s capital.

The Prince and the Prime Minister, who share an interest in environmental issues, discussed the commitments made as part of the Paris Agreement, the threats associated with climate change, particularly in the Arctic and Antarctic, and ocean conservation.

These shared concerns have long brought the two countries together. The Earth’s poles are the first witnesses to global warming. It is an issue which hits very close to home for Canada, and has also fallen within the scope of the Prince Albert II Foundation’s activities since its inception in 2006.

The visit by the Sovereign Prince and his delegation continued with a working lunch hosted by Dominic LeBlanc, Minister of Fisheries, Oceans, and the Canadian Coast Guard, during which discussions covered topics of interest to both nations in the fields of ocean conservation and marine pollution.

In the evening, the Monegasque delegation attended a dinner hosted by Ms Julie Payette, Governor General of Canada, to commemorate ten years of diplomatic relations between the two countries.