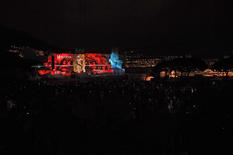 On Saturday evening, the 1st Meeting of Historical Sites of the Grimaldis of Monaco concluded with a sound and light show devoted to the Grimaldi dynasty and projected onto the walls of the Prince’s Palace.

This first day of celebrations was marked by a number of highlights: folk dances and cultural performances presented by the guest sites, historical medieval battles and the traditional bonfire of St. John, giving all of the folk groups the opportunity to join Monaco’s La Palladienne.

The Meeting paid tribute to the Marquisate of Baux and the Earldom of Carladès in honour of Hereditary Prince Jacques and Princess Gabriella. The town of Menton, which was part of the Principality for five centuries, completed the guest list.

Head to Place du Palais tomorrow, Sunday 24 June, from 11.55 am for a second day of festivities to mark the 1st Meeting of Historical Sites of the Grimaldis of Monaco.