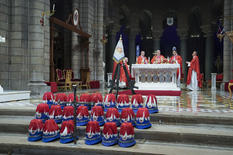 On Monday 20 January, ceremonies commemorating Saint Sebastian, Patron Saint of the Palace Guards, were celebrated in the presence of the Minister of State, the President of the National Council, the President of the Crown Council, the Secretary of State, Government Ministers, and the Heads of the Administrative Departments and the Monegasque and French civil and military authorities.

The solemn Mass was celebrated, for the last time, by Monsignor Bernard Barsi, Archbishop of Monaco, and concelebrated by the diocesan clergy, with the assistance of the Orchestra of the Palace Guards, conducted by Major Olivier Drean, with Mr. Stéphane Catalanotti at the great organ.

A reception, preceded by an address by the Head of the Corps of the Palace Guards, Commander Gilles Convertini, was then held for the participants in the conference room of the Oceanographic Museum.