12 and 13 March 2020 at the Oceanographic Museum of Monaco - 10th International Monaco and the Mediterranean Meetings (RIMM), "Acting for Heritage," organised by the AMCA 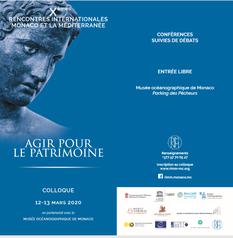 Since they were first created in 2001 by the art historian Elisabeth Bréaud, the International Monaco and the Mediterranean Meetings (RIMM), held under the High Patronage of H.S.H. Prince Albert II of Monaco, have enjoyed the support of the Prince's Government.  The aim of these Meetings, which are open to the public, is to bring experts from a variety of fields together every two years to reflect on the major topical issues that the Mediterranean region is facing and put forward possible solutions.

For their tenth event, the International Monaco and the Mediterranean Meetings have named their colloquium "Acting for Heritage," because the traces of human genius are more fragile than ever and are even under the threat of disappearing completely.  Today, however, awareness is such that many different actions are being taken - legal and political arsenals of governance, solidarity between international institutions and local players, the involvement of civil society and the creation of digital applications.  This heritage, whether tangible or intangible, is the subject of crucial issues that cover many areas - education, tourism, urban development and ecology, an aspect that is important in managing our future.

On 12 and 13 March 2020, at the Oceanographic Museum of Monaco, these issues will be addressed at the 10th RIMM Meetings by bringing historians, philosophers, archaeologists, architects and renowned figures from the political world and civil society together at four round tables.  They will report on their activities in the field and on their most recent achievements with regard to conservation, reconstruction and refurbishment.  The speakers at this 10th meeting are:  Mounir Bouchenaki, Bertrand Badie, Charles Méla, Ali Benmakhlouf, Nicolas Grimal, Gabriella Battaini-Dragoni, Pr. Maamoun Abdulkarim, Luis Monréal, Yves Ubelmann, Ondine Bréaud-Holland, Ariane Neroulidis, Xavier Casanovas I Boixereu, Jean-Louis Rastoin, Thomas Fouilleron, Elena Rossoni-Notter and Ferid Boughedir.

The colloquium will be officially opened by H.S.H. Prince Albert II of Monaco on Thursday 12 March at 10.30 a.m., in the presence of Ms. Audrey Azoulay, Director-General of UNESCO, and Mr. Xavier Darcos, Chancellor of the Institut de France.

The colloquium will be structured around four round tables:  Mediterranean Heritage - Legacies and Future Prospects; Heritage in Tension - Protection Strategies and New Forms of Governance; Collaborative Heritage;  and Monaco and its History.  Finally, a "live discussion" with the Tunisian film-maker Ferid Boughedir, followed at 8 p.m. by his film "Halfaouine, l'enfant des terrasses" ("Halfaouine, Child of the Terraces"), will bring this 10th RIMM event to a close.