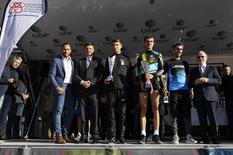 On Sunday 15 December, Bastien Isaia, President of the Monaco Police Sports Association, and his team organised the twenty-fifth traditional U Giru de Natale race in the streets of the Principality.

The event proved to be a huge success, with more than 1,600 competitors lining up at the start (on Boulevard Albert I). Minister of the Interior Patrice Cellario, along with numerous personalities, congratulated the runners during the prize ceremony.

The route for the ten-kilometre run took joggers across the Place du Palais, via the Rampe Major, and then on to the Place du Casino.

Special guests Paula Radcliffe and Gareth Wittstock represented the Princess Charlene of Monaco Foundation, to which a donation of €2,000 was made. The Foundation supports children’s wellbeing and development through sport.

Anne Tabarant won the flagship race for the fifth time in her career, while Raphaël Montoya, the world triathlon champion was first to cross the finish line in a little over 30 minutes.

More information is available on Monaco Info and social media.