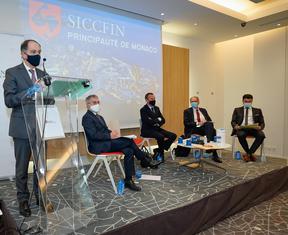 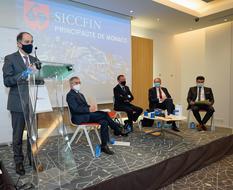 A morning of work to provide an update on progress with the Principality’s second National Risk Assessment (NRA2) process, covering money laundering, terrorist financing and corruption (AML/CFT-C), was held on 12 November 2020 at the initiative of Michel Hunault, Director of SICCFIN, assisted by Phoenix Consulting.

The meeting, which was attended by Jean Castellini, Minister of Finance and Economy, Patrice Cellario, Minister of the Interior, Robert Gelli, Secretary of Justice, and Sylvie Petit-Leclair, Public Prosecutor, brought together 100 people representing the public and private sectors, and key leaders of the Principality’s major economic players.

Following some introductory words from Michel Hunault, Jean Castellini noted that NRA2 aimed to provide an understanding of Monaco’s AML/CFT-C vulnerabilities. The assessment had to be cross-cutting and involve all stakeholders in the country’s economy and finance sector.

He welcomed the presence of representatives from Monegasque foundations and associations, since their involvement in the NRA was important, particularly with respect to combatting terrorist financing.

Jean Castellini announced that following NRA2 and the consideration and adoption by the National Council of bill no. 1.008, transposing the EU’s Fifth Money Laundering Directive, guidelines would be drafted and sent to professionals to enable them to better understand the AML/CFT legislation.

He emphasised that regulation was not an enemy of business, but the prerequisite for confidence in Monaco’s banking and financial sector and in the sector’s respectability. For the Prince’s Government, AML/CFT-C is more than a priority, it is a routine requirement for every action that is undertaken.

Robert Gelli then presented Monaco’s judicial policy in the AML/CFT field, and drew attendees’ attention to the criminalisation of the concept of negligence, which is the failure to comply with the obligations imposed on professionals subject to Act 1.362, dated 3 August 2009, as amended.

His words were echoed by Police Commissioner Richard Marangoni, who discussed the scale of the challenge following the recent terrorist attacks committed in France and Europe.

The National Council was represented by Mr Thomas Brezzo, member of the Council and Chair of the Legislation Committee, who noted the close cooperation between the assembly and the Government to ensure that the Principality has legislation that meets the leading international standards (EU Fifth Directive, FATF Recommendations), which change regularly. He indicated that bill number 1.008, strengthening the mechanism for combatting money laundering, terrorist financing and corruption, was set to be adopted on 16 December, at a session that would be exclusively devoted to this issue.

Closing the meeting, the SICCFIN Director thanked the speakers and participants, and noted that he hoped to see them again in spring 2021 to hear the conclusions of NRA2. 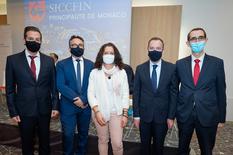