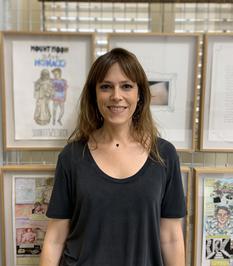 What is the starting point of the exhibition?

The exhibition brings together for the first time 300 works on paper and glass plates by painter Eugène Frey (1864 - 1942), stemming from the collections of the NMNM, Monte-Carlo Société des Bains de Mer and Musée Nicéphore Nièpce. Today almost an unknown artist, Frey invented in 1900 the stage design technique of the “Décors Lumineux à transformations” [“transforming Light Sets”],  a complex system of lighting projections that combine photographic, pictorial and cinematographic techniques. With his projections, Frey decorated sets in multiple variations of colours, lights and forms and even incorporated moving images. He developed this technique on the stage of the Opéra de Monte-Carlo until the 1930’s.

Can you tell us more about the invitation made to João Maria Gusmão?

In this rediscovery I wished to combine a historical perspective with the contemporary vision of the artist João Maria Gusmão, who, through his plastic, film and literary work has imagined and reinterpreted different experimental analog media. He therefore created a scenographic magic lantern installation on the scale of the Villa Paloma, offering the visitors an experience of  “continuous light micro-cinema” combining different animation techniques used by Frey.

What types of works will João Maria Gusmão’s commission resulted in the creation of 6 new works, presented alongside previous works that he had made with Pedro Paiva ?

The exhibition sets out to reveal the interactions between the technique that Frey developed for the stage and the experimental creations of a number of artists, choreographers and directors, from the turn of the 20th century to the present day.

It therefore presents a great diversity of work: from the shadow pieces created by Henri Rivière and Caran d’Ache for the Chat Noir cabaret to the mechanical theatre by craftsman Emmanuel Cottier, artist Hans-Peter Feldmann’s shadow theatre, performances by Lourdes Castro, silhouette films made by Lotte Reiniger or Michel Ocelot, phantasmagorical experiences created by Georges Méliès, Alexandre Alexeieff and Claire Parker or Jean Hugo, or else Loie Fuller’s light choreographies.