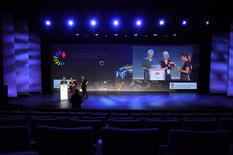 There are just 24 hours to go before the 36th Ministerial Conference of La Francophonie opens, and final preparations are being made at the Grimaldi Forum Monaco. The two-day event will bring together representatives from the 88 member states and governments of the International Organisation of La Francophonie (IOF) in the Principality.

With presenter Maïtena Biraben acting as mistress of ceremonies, H.E. Serge Telle, the Minister of State, will kick off the high-level conference at 9.30 am tomorrow morning, alongside H.E. Louise Mushikiwabo, IOF Secretary-General, and H.E. Zohrab Mnatsakanyan, Armenian Minister of Foreign Affairs and President of the 36th IOF Ministerial Conference.

In addition to the official speeches, a key theme of the opening ceremony will be young people, who are a unifying mainstay of the French-speaking world. The proceedings will therefore feature artistic interludes courtesy of the Little Singers of Monaco, dancers from the Princess Grace Dance Academy and a message delivered by students from the Sciences-Po campus in Menton.

Teams at the Grimaldi Forum, who are, it must be said, well accustomed to handling major international events (meetings of the IOC, UNEP, Interpol, etc.), have been working hard since Thursday 25 October, under the supervision of the Ministry of Foreign Affairs and Cooperation, on the event concept and on setting up the spaces to be used for the various sessions. The Salle Prince Pierre, which will host the opening ceremony, has been transformed to present a huge, animated view of the Principality throughout an entire day.