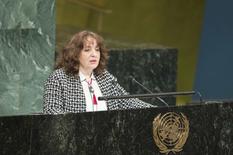 H.E. Ms Isabelle Picco, Ambassador and Permanent Representative of the Principality of Monaco to the United Nations © UN photo/Rick Bajornas

H.E. Ms Isabelle Picco, Ambassador and Permanent Representative of the Principality of Monaco to the United Nations, took part in the 73rd United Nations General Assembly on Monday 3 December. During the session, a resolution under the new title of “Sport as an enabler of sustainable development”, which was co-sponsored by 97 nations, was adopted by consensus.

In her speech, the Ambassador paid tribute to the work of the International Olympic Committee (IOC) and its positive contribution to the UN’s activities, highlighting the first Olympism in Action Forum held on the eve of the opening of the Summer Youth Olympic Games in Buenos Aires.

She recalled the joint work carried out by the Tunisian and Monegasque delegations, who co-chair the Group of Friends of Sport for Development and Peace. The activities of this group were stepped up following the Secretary-General’s decision not to appoint a new Special Envoy.

During the preceding year, the missions had organised monthly working meetings between member states and relevant UN bodies (UNDP, UN Women, the Secretary-General’s Special Envoy on Youth, and the Department of Public Information).

The Ambassador also mentioned the many activities in which the Monaco mission had been involved, notably as part of celebrations to mark the International Day of Sport for Development and Peace and the High-Level Political Forum, as well as its efforts to promote the role of sport in implementation of the Sustainable Development Goals.