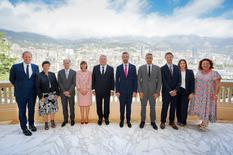 On 7 June 2022, H.E. Mr Jordi Torres, the Andorran Minister of Tourism and Telecommunications, paid a working visit to the Principality. He was accompanied by H.E. Ms Eva Descarrega, Andorra’s Ambassador to Monaco, Mr César Marquina Perez De La Cruz, Secretary of State for the Digital Transformation and Strategic Projects in Andorra, and Mr Josep Antoni Ambattle, the Deputy CEO of Andorra Telecom.

The delegation was received by H.E. the Minister of State, Pierre Dartout, for a working lunch at his residence, which was also attended by Mr Jean Castellini, Minister of Finance and Economy, Ms Isabelle Rosabrunetto, Director-General, representing the Minister of Foreign Affairs and Cooperation, Ms Laurence Garino, Chief of Staff to the Minister of State, and Mr Frédéric Genta, Country Chief Officer for Attractiveness and the Digital Transition.

During the morning, following a tour and presentation of Monaco Cloud led by CEO Mr Pierre Puchois, the Andorran delegation visited the Digital Transition Office for a series of meetings and discussions focused on the digital models and policies of the two principalities. H.E. Mr Jordi Torres had a private meeting with Mr Frédéric Genta. Two meetings also led to a presentation of the Extended Monaco programme and the Office for Outer Space Affairs, followed by a meeting with a stakeholder from the Monegasque market, Mr Francesco Bongiovanni, CEO of Orbital Solutions Monaco.

The delegation’s working visit concluded in the afternoon with a meeting with Mr Guy Antognelli, Director of Monaco’s Tourist and Convention Authority.