Annual Reception of the New Economic, Social and Environmental Council 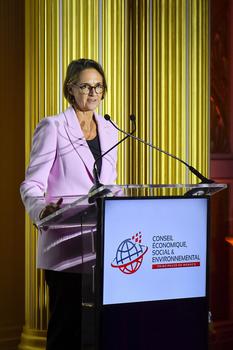 On Wednesday 27 November, in the presence of H.S.H. Prince Albert II, Caroline Rougaignon-Vernin, the President of the Economic, Social and Environmental Council (CESE), brought together many dignitaries from the Principality, including H.E. the Minister of State, Serge Telle, Government Ministers and representatives from the economic and social world. This was her first annual reception as President of the Council, whose name now affirms the environmental scope of its mission.

During this evening event, participants had the opportunity to watch a video in which the new name of the Economic, Social and Environmental Council and the entity's new logo were unveiled. The logo retains the same visual identity and remains in harmony with the other Monegasque Institutions. The environmental aspect, represented by the stylised planet, reflects a slight change to the previous logo.

Ms Rougaignon-Vernin succeeded André Garino as President in November 2018. In her speech, she paid tribute to her predecessor before referring to the positive results of the past year, during which 10 wishes and two opinions were drawn up. The President then emphasised the importance of the consultative role of this Assembly, which is a privileged forum for dialogue and proposals. Its role is to formulate wishes and give an opinion on topics related to the economic, social and now the environmental life of the country.

She then expressed the wish that the Council would continue to be involved in discussions on all the texts related to these issues.

You can find an interview with Caroline Rougaignon-Vernin on Monaco Info's social networks. 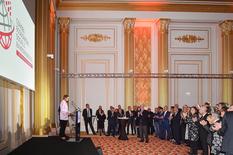