On the morning of Tuesday 11 June, an anti-pollution exercise was held on the site of the offshore urban extension project. The fictitious scenario involved a significant leak of hydraulic oil from a vessel installing the protective shell for the band of caissons.

The exercise was carried out in real time under the direction of the Marine and Airport Police Division (DPMA), in association with Government authorities (the Fire and Emergency Service and the Department of Maritime Affairs, among others), teams from Bouygues Travaux Publics Monaco and its subcontractors, the Monaco Port Authority (SEPM), the URBAMER project team and the company SAM Anse du Portier.=

Seven vessels and around 20 people were mobilised on site.

A crisis cell comprising teams from the Government, URBAMER, Bouygues TP and SAM Anse du Portier was immediately set up to coordinate operations to control the pollution and ensure cohesion across the various human and material resources deployed.

The exercise provided an opportunity to assess the adequacy of emergency procedures and test the process for triggering them. It also confirmed the responsiveness and effective coordination of all the various stakeholders, both public and private, when faced with this type of scenario, and validated the role of Ecotank in tackling any pollution incidents on the project site. In sum, the exercise tested the effectiveness of the pollution response resources in place and strengthened operational coordination between the partners working on the project. 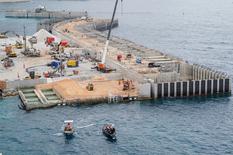