Back to school in the Principality 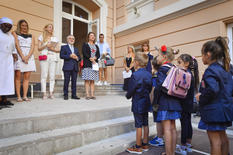 Minister of Interior Patrice Cellario, accompanied by Director of Education, Youth and Sport Isabelle Bonnal, was at François d’Assise – Nicolas Barré (FANB) Primary School on the Rocher this morning as Year 2 pupils headed back to school after the holidays.

“The first day of the new school year is an important event and I wanted to be here to welcome the new headmistress and the pupils at François d’Assise – Nicolas Barré Primary School,” said the Minister.

The three Year 2 classes were greeted at 9.30 am by new headmistress Nathalie Damasco, who taught at Condamine Primary School last year.

Today sees 5,745 pupils return to school in the Principality: 4,489 to state-run schools and 1,256 to private schools operating under contract. They will be supervised by 858 staff, including 514 teachers.