Building up French snowflake populations in the Principality of Monaco 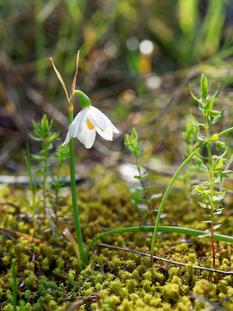 The French snowflake (Acis nicaeensis) is a herbaceous plant notable for its small, white, drooping flowers. It particularly likes chalky soils and is often found in rocky clefts or dry, rocky grasslands. The species, which is endemic specifically to the Alpes-Maritimes region, is today considered in danger of extinction.

In the Principality, the plant, an important part of local heritage, is found in three locations: on the Rocher (Glacis to Rampe Major), on the Tour de l’Eperon (Chemin des Pêcheurs) and in the cliffs of the Sainte-Dévote valley.

A general decline in French snowflake populations has been noted in recent decades. The plant is endangered primarily by urbanisation and invasive exotic species. Keen to preserve its natural heritage, the Prince’s Government has therefore embarked on a major action plan to maintain these populations. There are several goals: improving understanding, preserving and restoring the plant’s natural habitats, building up plant populations, etc.

With this in mind, an extensive replanting programme was initiated by the Department of the Environment in 2019, with the collection of more than 1,500 seeds planted at the Conservatoire botanique national méditerranéen de Porquerolles (CBNMed, National Mediterranean Botanical Conservatory of Porquerolles), a partner of the initiative.

More than 900 seedlings are to be replanted on 5 and 6 October on the rocky slopes beneath the Palace (Glacis) and in the Saint-Martin Gardens. Several actors are involved in this vast operation: teams from the Prince’s Palace Management and Gardens, the Department of Urban Amenities, the Exotic Garden, CBNMed and the Mediterranean Institute of Marine and Terrestrial Biodiversity and Ecology (IMBE).

To ensure the success of the effort, the sites will be monitored by scientists on a regular basis. Similar operations to build up the population will be scheduled over the coming years as part of the local French snowflake action and management plan.