Three years after it first opened its doors, the benchmark Matana Secondary School, which educates 269 pupils, including 32 orphaned or vulnerable children, came third in a national schools competition in Burundi. 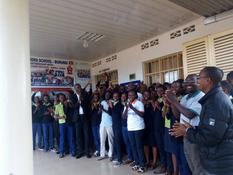 Taking part in the national competition for the first time this year, Matana School presented 62 pupils from its first class. Their consistent hard work and quest for excellence enabled the school’s oldest pupils to achieve third place in the national ranking, with an average mark of 74.9% in the examination. In Burundi, this competitive exam allows pupils to enter the post-basic stage of education, the equivalent of the French lycée or upper secondary level.

The school is located in Bururi Province and was built in 2014 at the initiative of FVS-AMADE Burundi thanks to grants from the Government of the Principality of Monaco and AMADE Mondiale. Pupils benefit from a high-quality education, enabling them to reach their full potential and, quite possibly, become future leaders of their country.

The school incorporates a boarding option which provides a comfortable environment conducive to study for children whose extreme poverty could otherwise force them to drop out of school to beg on the streets, work as domestic staff or even, in the case of girls, get married. For these orphans and vulnerable children, school is a real opportunity for them to improve their lives and those of their families.

Support for vulnerable and street children is a flagship programme of Monaco’s Official Development Assistance.