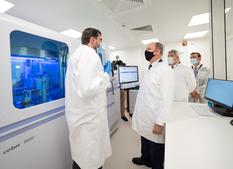 On Monday 16 November, H.S.H. Prince Albert II officially unveiled the new facilities at a sealed, secure laboratory known as laboratory P3 at the Monaco Scientific Centre (CSM). Access to this type of laboratory is regulated and for authorised, trained staff only. The Sovereign Prince was able to learn more about the use of a new, high-throughput molecular biology analysis system, the Cobas 6800, which the Principality has recently acquired to help tackle the health crisis. He was accompanied by Minister of State Pierre Dartout, ministers Didier Gamerdinger and Patrice Cellario, Country Chief Digital Officer Frédéric Genta, President of the National Council Stéphane Valéri, Deputy Director General of Roche Diagnostics France Carlos Justiniani and President of the CSM Professor Patrick Rampal.

The equipment, ordered by the Prince’s Government in May this year at the behest of H.S.H. the Sovereign Prince, means that the pace of PCR testing can be ramped up considerably, guaranteeing the Principality’s independent capacity to test for the virus. As well as the additional resources and efficiency provided in the context of managing the COVID-19 pandemic, this acquisition will also allow Monaco to plan for the future, with the aim of using this modern tool to combat other potential health threats.

Delivered by Roche Diagnostics, this machine alone will initially carry out 400 tests a day. This will mean that the majority of nasopharyngeal samples taken in the Principality can be tested here, with the remainder covered by private laboratories in Monaco. In practical terms, this will relieve pressure on Princess Grace Hospital by outsourcing all PCR testing from the hospital to the CSM, while the national testing centre, which will continue to increase in capacity and strength, will be able to send all of its samples to the CSM.

As Minister of State Pierre Dartout explained: “This tool strengthens the mobilisation of all of the public and private laboratories in the Principality, which have been working tirelessly since the beginning of the health crisis to conduct as much testing as possible. We have been increasing our test capacity since September. Today, the Principality is on the cusp of becoming completely independent on testing. This will enable us to develop an even broader and quicker testing policy in the coming weeks.”

To cut the time between obtaining a test result and communicating it to the patient as far as possible, the Digital Transition Office has worked with the teams at Roche, Princess Grace Hospital and the CSM to digitalise and automate the testing process. This should reduce the length of time between the sample being taken and results being communicated by 50% (12 and 24 hours compared to 36 hours previously). This type of integration and these timeframes correspond to the highest international standards.

Frédéric Genta, Country Chief Digital Officer, said: “The digital integration between the Prince’s Government, Roche and the state platform for checking results will drastically cut the time it takes to make results available, offer patients a better experience at an extremely anxious time and allow decision-makers access to all data in real time.”

Minister of Health and Social Affairs Didier Gamerdinger explained the advantages of digitalising the testing process: “In addition to a rapid response for patients, this will enable the Government and the health authorities to have access to reliable and comprehensive data so that they can make the best decisions for the Principality. It is a very comprehensive system that will give us a fresh boost in our efforts against the virus.”

The new equipment also adds a new dimension to the Monaco Scientific Centre, which has refocused its original remit to address the fight against the coronavirus. As the Centre’s President, Professor Patrick Rampal, explains: “Initially, we will use the Cobas 6800 to analyse nasopharyngeal samples in the context of the COVID-19 pandemic. But we are currently validating other methods of sampling for PCR tests, in partnership with Princess Grace Hospital. I’m thinking, for example, of oropharyngeal samples, which could soon replace the nasopharyngeal type.”

The CSM is also, however, looking towards the post-COVID era and making new plans for this new equipment, which will be useful for other, more conventional testing, such as for the papillomavirus. “The ability demonstrated by the Monaco Science Centre in spring to reorganise in order to respond to the Principality’s health needs deserves praise, and it is showing this ability again today, while looking to the future by already working on new plans for research and testing,” concluded Minister of the Interior Patrice Cellario.