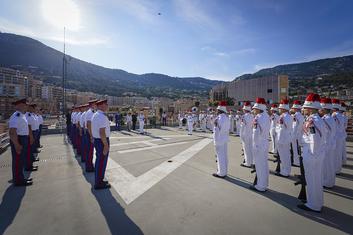 Ceremony for trainee Palace Guards from the Jaumary class: presentation of flag, blessing and award of insignia

On Thursday 19 May 2022, H.S.H. Princess Stéphanie, the patron of the Palace Guards, awarded the corps insignia to ten trainee* Palace Guards from the “Palace Guard Félicien Jaumary” class. The presentation was attended by Colonel Tony Varo, Supreme Commander of the Military Force. The military ceremony was held on the helicopter landing pad of the Moneghetti Barracks.

After a welcome from Commander Martial Pied, Chief Officer of the Palace Guards, and a military inspection, the Palace Guards’ Flag was presented to the young recruits, who then received their corps insignia from the patron, blessed by Father Christian Venard, Chaplain of the Military Force. The ceremony closed with the Monegasque national anthem led by the Palace Guards Orchestra and all of the soldiers.

On 16 May, the candidates swore an oath to H.S.H. the Sovereign Prince and His Family, committing to serve them with “honour, loyalty and devotion” as stated in the Palace Guards’ motto.

* A new recruitment campaign for the Palace Guards has been launched. All of the information required to complete an application (which should be submitted before 30 June 2022) is available on: https://carabiniers.gouv.mc/devenir-carabinier-du-prince/conditions