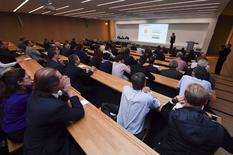 On Wednesday 5 December 2018, the Police Department, in partnership with the Monaco Association for Financial Activities (AMAF), held a conference and debate at the Auditorium of Monaco's Vocational and Catering School (Lycée Technique et Hôtelier) on issues related to security in the Principality of Monaco.

This meeting was chaired by the Minister of Interior, Mr. Patrice CELLARIO, and initiated by Mr. Richard MARANGONI, Director of the Police Department, and Mr. Etienne FRANZI, the President of AMAF.  It was aimed at professionals from the Principality's banking sector and managers in the field of accountancy.

Based on developing the partnership referred to in the "Monaco, a Safe City" project, the Police Department wished to present a broad view of security-related preventative measures in Monaco.

Thus, five topics were addressed by specialists working at the Police Department:

Through these working meetings, the Police Department wishes to put in place a proactive preventative policy, by promoting, in particular, a solid partnership with the Principality's various socio-economic actors, and, more widely, with the entire population.

These meetings with professionals from the banking sector, which are also envisaged for the luxury and hotel sectors, and more generally with the Principality's various economic players, should make it possible to establish the basis for a future structure for the exchange of information which, undertaken within a regulatory framework, will make it possible to maintain and strengthen the high level of security that endures in the Principality.