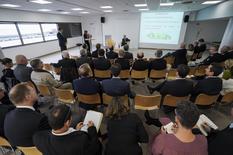 At the end of last week, Marie-Pierre Gramaglia, Minister of Public Works, the Environment and Urban Development, and Patrice Cellario, Minister of the Interior, invited 40 representatives from Monaco’s institutions and non-profit organisations to a discussion focusing on soft mobility in the Principality, and more specifically on the Monabike electric bike service and powered transporters (electric scooters, powered unicycles, Segways, hoverboards, etc.).

These are modes of transport that offer new solutions for everyday travel, but their presence alongside more traditional modes – public transport, cars, pedestrians – raises a variety of issues regarding safety, facilities, the sharing of public space, road improvements, and so on.

All of these issues were debated at the meeting, during which all attendees were able to express their views, share their experiences and put forward their ideas with the aim of exploring ways to achieve peaceful coexistence with car drivers and pedestrians, particularly the most vulnerable (the elderly, children, people with reduced mobility).

Following two hours of discussion, the ministers thanked those who had participated for the quality of the debate, and assured them that the Government would draw on the outcomes of the meeting as it moved ahead with the implementation of new regulations for both bikes and powered transporters.