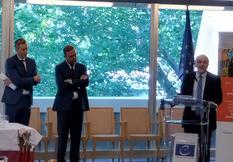 On Monday 13 June 2022, the fifteenth anniversary of the Enlarged Partial Agreement on Sport (EPAS), of which Monaco became a member in 2008, was celebrated on the margins of the sixteenth meeting of the EPAS Governing Board. Deputy Secretary General of the Council of Europe Mr Bjørn BERGE, Chair of the Governing Board Mr Alexandre HUSTING and President of the EPAS Statutory Committee H.E. Mr Rémi MORTIER hailed the work done and the results achieved by the Partial Agreement.

The EPAS has 41 member states and offers a platform for intergovernmental cooperation between public authorities. The Agreement also facilitates dialogue between governments, sports federations and NGOs, with the latter coming together in the Consultative Committee (on which the Principality of Monaco is represented by the Peace and Sport association). The EPAS seeks to promote the development of sport in modern society and highlight its positive values. It develops standards (political and legal), ensures that they are followed and offers support and opportunities to share best practice. The EPAS draws on the Council of Europe’s normative instruments, including the European Sports Charter, the Code of Sports Ethics and the European Convention on Spectator Violence, in devising its own strategies.

In his speech, H.E. Mr Rémi MORTIER, who was elected as head of the EPAS Statutory Committee in 2016, highlighted the actions taken by this body in the field of gender equality in sport, notably the ALL IN project. The Ambassador also reaffirmed the role played by Monaco in promoting the ethical, inclusive and safe dimensions of sport, as well as the major contribution made by H.S.H. the Sovereign Prince in advocating the “right to sport”. He announced that sport would be a key priority during the Monegasque Presidency of the Council of Europe in 2026.