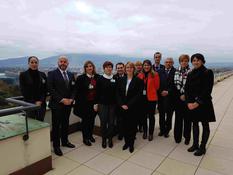 On 9 November 2017, a Monegasque delegation,* led by H.E. Ms. Carole Lanteri, Ambassador, Permanent Representative of Monaco to the United Nations Office at Geneva, took part in a Dialogue in Geneva with the United Nations Committee on the Elimination of Discrimination against Women.

The purpose of this meeting was to examine the initial report and Monaco's 2nd, 3rd and 4th periodic reports, submitted in 2016 by the Prince's Government, concerning the implementation of the Convention on the Elimination of All Forms of Discrimination against Women (CEDAW).

The examination of these reports was an opportunity for the Monegasque Delegation to better explain how the Monegasque authorities are working on the compliance with and the implementation of this Convention, in support of the Principality's legislative and institutional framework.

In this regard, the most recent measures to promote women's rights and help combat discrimination against women were highlighted, in particular:  Act No. 1.382 of 20 July 2011 on the prevention and repression of particular types of violence;  Act No. 1.440 of 5 December 2016 amending certain provisions of the Civil Code relating to surnames and introducing the antenatal recognition of children;  the ratification of several international instruments in this regard, in particular the Optional Protocol to the CESDAW Convention (2016).

As a reminder, the CEDAW Convention was adopted in 1979 and entered into force in 1981.  It was ratified by the Principality in 2005.  By acceding to this Convention, States undertake, in particular, to pursue, by all appropriate means and without delay, a policy aimed at eliminating all forms of discrimination against women.  The implementation of the Convention is subject to periodic reports, examined by an independent Committee of Experts in dialogue with the State Party concerned.  This exercise then leads to a set of recommendations made to the State Party with a view to strengthening its implementation of the Convention.