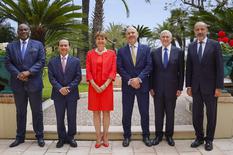 A lawyer by education, a career diplomat and an expert in international relations, H.E. Mr Carlos-Edmilson Marques Vieira served as Guinea-Bissau’s Permanent Delegate to UNESCO. Since 2017, he has been Guinea-Bissau’s Ambassador to Ethiopia and Permanent Representative to the African Union and the United Nations Economic Commission for Africa.

A law graduate, H.E. Mr Victorio Redondo Baldrich began his diplomatic career in 1991 at the Spanish Ministry of Foreign Affairs. He served as Political Counsellor at the Spanish Embassy in Moscow from 1996 to 2000, and then took up a post at Spain’s Permanent Representation to the European Union in Brussels. He was recently appointed Spain’s Ambassador to Switzerland and Liechtenstein.

From 2011, H.E. Mr Mohamad Oemar served as Chief of Staff in the Secretariat of the Indonesian Vice President. He previously occupied a variety of posts in the Indonesian Ministry of Foreign Affairs and abroad (Brussels, Geneva, Beijing) before being appointed as Ambassador to Italy from 2009 to 2011.

Agricultural engineer H.E. Mr Oscar José Orrantia Vernaza has a wealth of private-sector experience in the fields of manufacturing, agriculture and banking. He has been Ecuador’s Ambassador to France since 2021.