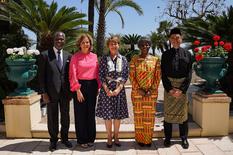 H.E. Dato’ Mohd Zamruni KHALID joined the Malaysian Ministry of Foreign Affairs in 1994, and subsequently took on multiple overseas postings, including at Malaysia’s embassies in Hanoi and Paris. In 2008, he became Malaysia’s Consul-General in New York. He then served as Deputy Director-General at the Ministry of Foreign Affairs from 2011 to 2016, before being appointed Ambassador to Vietnam and, more recently, Portugal.

Having joined the Foreign and Commonwealth Office (FCO) in 1989, H.E. Ms Menna RAWLINGS was appointed Consul-General in Washington, D.C. in 2008 and then served as Director-General Economic and Global Issues for the FCO.

H.E. Mr Maurice Kouakou BANDAMAN taught literature before embarking on a political career. Elected mayor of the commune of Taabo, he subsequently served as a member of the Côte d’Ivoire National Assembly in 2011, then as Minister for Culture and La Francophonie from 2011 to 2021.

H.E. Ms Anna Bossman has built up vast experience in the oil, gas and energy sectors, particularly in legal affairs. From 2011 to 2017, she served as Director of the Integrity and Anti-Corruption Department for the African Development Bank. As Ghana’s Ambassador to France and Portugal, she is also the country’s Ambassador and Permanent Delegate to UNESCO and the OECD.