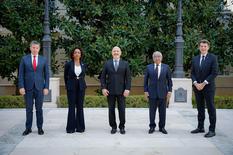 The diplomats presented their credentials to H.S.H. the Sovereign Prince during the morning.

H.E. Mr Olivier Rija Rajohnson spent nearly 40 years working in the private sector in a variety of fields (banking, fruit exports and tourism). He served as Permanent Advisor to the Prime Minister in the late 1980s and was Minister of Water and Forests from 1997 to 2002, then Chief of Staff to the President from 2011 to 2014. In 2020, he was appointed Ambassador and accredited to represent his country in France and the Holy See.

H.E. Ms Liliane Massala has worked to promote economic and social development in Gabon by founding the Franco-American Academy of Management, the International Institute of Advanced Education and Training for Digital Careers and the Christine Bahati Foundation for the wellbeing, health and education of women and young people. From 1987 to 2012, she served as Advisor and Deputy Chief of Staff to the President of the Gabonese Republic, before being appointed Secretary-General of several ministries between 2012 and 2020. Named an Ambassador in 2020, she is also the Permanent Representative to the International Organisation of la Francophonie.

Having joined the Federal Department of Foreign Affairs in 1991, H.E. Mr Roberto Balzaretti occupied a number of posts within the Department before being appointed Secretary-General in 2008 and then Legal Adviser. In parallel, he led the Swiss Mission to the European Union from 2012 to 2016 and was appointed Director of European Affairs and coordinator of all negotiations with the EU in 2018.

H.E. Mr Refik Ali Onaner worked in a variety of departments and ministries before taking on the role of Advisor to Turkey’s Permanent Representation to the Office of the United Nations in Geneva from 2006 to 2010. He continued his career at the Turkish Embassy in Paris as Counsellor and then Minister Counsellor from 2012 to 2017, before returning to Turkey and being appointed Chief of Staff to the Minister of Foreign Affairs in Ankara. He was accredited as Ambassador to Tunisia in 2019.