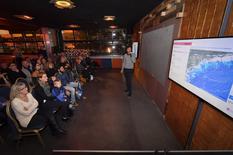 The high point of the European Week for Waste Reduction in Monaco, which concludes on Saturday 23 November, was a lecture titled “Monaco – a deep-water exploration”, organised by the Department of the Environment at Stars’n’Bars on Thursday 22 November.

The lecture followed on from an operation to clean up the coral-producing rocks just outside the Port of Fontvieille, whose rich biodiversity is the subject of scientific monitoring by the Department of the Environment. This joint environmental initiative, which was carried out on 20 September, involved divers from a variety of Monegasque institutions.* A report, illustrated with underwater photos and video shot during the operation, was presented to the public, revealing the impact of large volumes of macro-waste, a significant proportion of which comes from recreational fishing (fishing line, hooks).

The results of the deep-water expedition in the RAMOGE area, where the French, Monegasque and Italian governments cooperate on integrated coastal management and preventing marine pollution, were also presented, highlighting the harmful impact of plastic pollution in the Mediterranean at depths of more than 2,000 metres.

Concluding his presentation, Ludovic Aquilina, Team Leader at the Department of the Environment, reminded the audience that in a bid to limit deterioration of the marine environment, the Monegasque Government decided to reduce waste at source by banning the use of plastic straws from 1 January 2019 and plastic tableware (glasses, cutlery, plates) from 1 January 2020. The aim is to achieve zero single-use plastic waste by 2030.

* Palace Guards, Fire and Emergency Service, Department of Maritime Affairs, Oceanographic Museum of Monaco, Monaco Scientific Centre and the Monegasque Association for the Protection of Nature.