On Monday 12 September, Their Serene Highnesses the Prince and Princess of Monaco took part in a ceremony to lay the first stone of the new shelter of the Société Protectrice des Animaux de Monaco, in Peille. The Princely Couple were accompanied by H.E. Pierre Dartout, Minister of State of the Principality, Ms Céline Caron-Dagioni, Minister of Public Works, the Environment and Urban Development, Ms Isabelle Berro-Amadei, Minister of Foreign Affairs and Cooperation, Mr Stéphane Valeri, President of the National Council, Mr Bernard Gonzalez, Prefect of Alpes-Maritimes, Mr Cyril Piazza, Mayor of Peille, and numerous representatives of State Departments and the Société Protectrice des Animaux (Animal Welfare Society).

The buildings currently housing the shelter run by the SPA de Monaco in Les Serriers, known as “L’Abri”, have become too small and outdated. As a result, the SPA and the Prince’s Government worked to find the ideal location in which to construct a set of new buildings, with modern, eco-sustainable facilities, to provide the animals sheltered and the staff caring for them with the best possible environment.

The search took several years, owing to the constraints involved in building infrastructures of this kind. The site required around 1 hectare of land, preferably flat, with no residential buildings within a radius of at least 500 metres.

In March 2018, the Mayor of Peille and the Prefecture of Alpes-Maritimes offered the Principality a plot of land on which to build an animal shelter, but given the natural constraints, a number of preliminary studies were carried out (sanitation; flora and fauna). After obtaining the necessary administrative permits, the deed of purchase of the land was signed between the Municipality of Peille and the Société Immobilière Domaniale (Monegasque State-owned Property Company) on 16 December 2021.

The Department of Public Works of the Prince’s Government was able to break ground in January 2022, and is now preparing to begin the construction phase. The completed buildings are due to be delivered at the end of 2023. 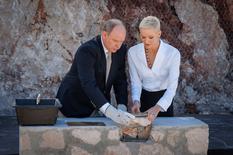 At this symbolic ceremony to lay the first stone of the main building, it was also announced that H.S.H. Princess Charlene of Monaco was to become the new President of the SPA de Monaco, and the Princess took the opportunity to present her new Board of Directors.

Princess Charlene is strongly attached to animal welfare and has for some years been supporting conservation efforts for rhinoceroses through Her Foundation, in addition to Her work with the South African NSPCA, the Kevin Richardson Foundation and the Thanda Foundation.