Formula 1 Grand Prix: 2022 proved to be a fantastic year! 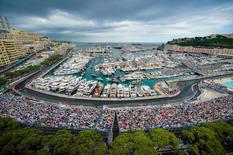 With work to dismantle the circuit now underway, it is time to look back on the latest Formula 1 Grand Prix, held from Thursday 26 to Sunday 29 May inclusive. There can be no doubt about the outcome: all the indicators show that the 2022 event was a genuine success after two more restrained years, with the Grand Prix having been cancelled in 2020 and limited to 50% capacity last year. The same positive trend also characterised the e-Prix and Historic Grand Prix, held earlier in May.

Visitors flocked to the Principality in great numbers

Whether they came by rail, by boat or by helicopter, the number of people travelling to Monaco to watch the Grand Prix increased compared with 2019, the last time the event was held without limitations on capacity. Only the number of vehicles entering the country remained stable, showing that the exhortations to use public transport to travel to Monaco were heard.

The high number of visitors to the Principality were also reflected in the initial figures available from hotels. These were higher than in 2019, the most recent year for comparison, with the occupancy rate up 3% and the average room price up 18%. The cumulative occupancy rates for 3, 4 and 5 star hotels across the four days of the Grand Prix were at or close to 100%.

As for restaurants, an initial estimate based on a survey conducted among restaurateurs by the Welcome Office shows that 80% of them assessed that the Grand Prix had had a “positive or very positive” impact on their business. They reported being extremely busy across the four days, particularly those in La Condamine and Monte-Carlo. Guests represented a variety of nationalities, with most coming from Europe (France, Italy, the UK and Germany) but also some from the United States and Latin America.

Overall, the restaurant owners surveyed welcomed the work that had been done on security.

Traders who highlighted some challenges due to reduced consumption or problems with access also considered that visitor numbers were high and they had had a good Grand Prix.

The Prince’s Government would like to pay tribute to the commitment of all private and public stakeholders, whose professionalism ensured that the 79th Formula 1 Grand Prix was a success, marking an encouraging start to the summer season.