As part of the celebrations marking the anniversary of the international Convention on the Rights of the Child, director Pascal Plisson’s latest film GOGO was screened in the Salle des Princes at Grimaldi Forum on Monday 29 November. The screening was attended by H.S.H. the Sovereign Prince, H.R.H. Princess Caroline of Hanover, the royal children and Monegasque personalities, as well as the director, the film’s heroine, and her great-granddaughter.

Gogo, which means “grandmother” in Swahili, is the oldest primary school pupil in the world. The film tells the incredible story of this exceptional woman who, at the age of 90 years old, decided to enrol in her Kenyan village’s primary school to set an example, campaign against forced marriage, which remains common in her country, and open up a path for all girls to whom access to education was long forbidden.

The evening, aimed at mobilising support for children who are denied their rights, got underway earlier in the afternoon with a variety of events, workshops and food kiosks.

The funds raised on this day of solidarity, to which will be added those raised through the various charitable activities led by Monaco’s pupils in schools, will help to ensure the continuation of the Department of Education, Youth and Sport’s essential work enabling children in Monaco and elsewhere to grow up and learn in a positive environment.

Under the high patronage of H.S.H. Prince Albert II, every year the Department of Education, Youth and Sport mobilises to celebrate the anniversary of the international Convention on the Rights of the Child, adopted by the United Nations General Assembly on 20 November 1989. 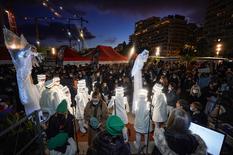