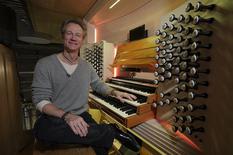 This week, Gunnar Idenstam, the Swedish organist, composer and folk musician, is recording a CD of his works on the great organ of Monaco Cathedral.  This musician, who is renowned worldwide for his virtuoso playing, astonishing improvisations and original approach to organ music, knows this instrument well, as he has already taken part several times in the International Organ Festival held every summer for the past 14 years by the Department of Cultural Affairs.

Gunnar Idenstam studied at the Royal College of Music in Stockholm and with Marie-Claire Alain in Paris.  He has won numerous prizes and awards, including the Grand Prix de Chartres, an international improvisation competition in 1984, the Royal Academy of Music's "Performer of the Year" prize, awarded by His Majesty King Carl XVI Gustav of Sweden in 2012, and the Royal Medal in recognition of high artistic ability, Litteris et Artibus, in June 2013.  He has been a member of the Royal Swedish Academy of Music since May 2013.

The Cathedral's great organ, inaugurated in 2011, is one of the largest in Europe and was built by the Thomas factory in Belgium.  It weighs 20 tons (the metal supporting structure alone weighs seven tons) and has four manuals, 79 stops and almost 7,000 pipes.  Its fame has contributed to the Principality's cultural influence.  Leading organists regularly request an opportunity to play it, and it is frequently mentioned in articles in specialist magazines, such as the highly regarded journal of the American Guild of Organists.

In addition to its liturgical use, the great organ is used for concerts and classes given by the official organist, Olivier Vernet, to students of the Academy of Music.  Visits and demonstrations of the instrument are also organised by the Friends of the Organ Association.