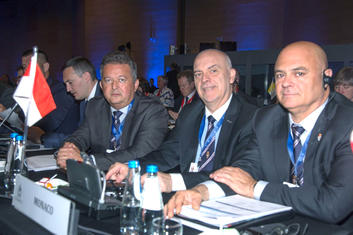 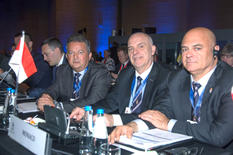 From 28 to 31 May 2019, Police Commissioner Richard Marangoni (Head of the INTERPOL National Central Bureau in Monaco) visited Katowice (Poland) to take part in the debates at the 47th International Criminal Police Organization (INTERPOL) European Regional Conference. He was accompanied by Chief Constable Stéphane Giorgetti, Acting Head of the Criminal Investigation Division, and Constable Olivier Jude, Head of the International Cooperation Section.

During these working meetings, a proposal to change and modernise intelligence procedures was put forward. Each INTERPOL member state was invited to contribute ideas on improving, at the international level, the provision of information required to identify criminals.

In the fight against terrorism, the recommendations focused on stepping up the sharing of biometric data, fingerprints and DNA samples for some “high-risk” individuals, while remaining within the limits of each nation’s own legislation.

On efforts to combat international drug trafficking, INTERPOL noted that in Europe, this scourge continues to be strongly linked to organised crime. The creation of a network of cybercrime experts was also proposed to tackle:

Through its National Central Bureau, the Principality of Monaco remains an active member of INTERPOL on issues of international cooperation. It continues to be a source of recommendations, with its globally recognised expertise on combatting international crime, and its speed in executing requests for cross-border arrests is still one of the main hallmarks of the INTERPOL National Central Bureau in Monaco.

The Commander in Chief of the Polish National Police, General Jarosław Szymczyk, warmly welcomed the Monegasque delegation and thanked the officers for their contribution, which is always highly valued. 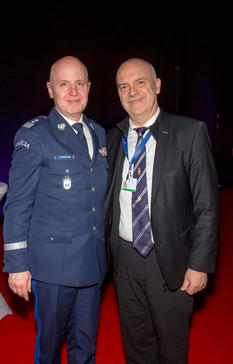 General Jarosław Szymczyk, Commander in Chief of the Polish National Police, on the left, and Richard Marangoni, Police Commissioner. © DR