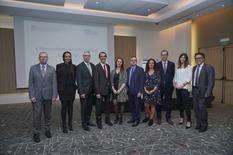 On 12 October, an information and awareness morning was held to address the challenges Monaco faces during its second national money laundering and terrorist financing risk assessment, organised by SICCFIN.

Following some introductory remarks, Philippe Boisbouvier, Acting Director of SICCFIN, noted that the national risk assessment affected all professions subject to the amended version of Act 1.362, dated 3 August 2009, and indeed all those involved in the Principality’s economy and voluntary sector, as well as relevant government departments and bodies.

Members of SICCFIN then gave a report of the first national risk assessment carried out in the Principality from December 2015 to June 2017 and the subsequent actions taken following approval by the government of the report and action plan. They also drew participants’ attention to the numerous new features of the next assessment, which will begin in January 2019.

World Bank expert Jean-Pierre Brun, who worked with the government on the first assessment, discussed how the tool provided by his organisation and used during the first exercise works, shared his views on the results of the previous assessment, and offered some valuable advice for conducting the next one.

The morning concluded with a speech by Minister of Economy and Finance Jean Castellini who, after thanking the speakers and welcoming the involvement of so many participants in such a critical process for Monaco, noted that a great deal of work had been done over the last decade and more to reach a point where the Principality no longer features on other countries’ money laundering and terrorist financing blacklists. He called on those present to do what was necessary to ensure that the Principality retains, globally, the level of compliance that it has achieved, allowing it to continue its social and economic development in accordance with the highest standards in this area, and in keeping with the road map set out by H.S.H. Sovereign Prince Albert II on His accession.