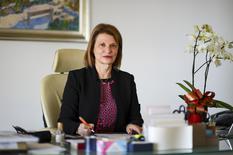 Ms. Isabelle Bonnal was promoted to Commissioner General of the Department of Education, Youth and Sport and confirmed in the corresponding rank by Sovereign Ordinance No. 8.564 dated 18 March 2021.

This honour pays tribute to Ms Bonnal’s career, during which she has dedicated nearly 45 years to education in the Principality. Her promotion also highlights the work that Ms Bonnal and her team have done to help train and develop young people.

Following a brilliant stint at university, where she obtained a D.E.A. postgraduate diploma with highest honours and a CAPES teaching diploma in French language and literature, Ms Bonnal began her career with the Principality’s Department of Education as a French teacher in 1978. After roles teaching in all of the Principality’s public and private secondary schools, she was appointed as Director of Education, Youth and Sport in August 2011.

Since her appointment, Ms Bonnal has particularly focused her efforts on pupils’ examination success, advancing the potential of each individual, modernisation and innovation in educational practices, and staff and student training.

The areas in which Ms Bonnal has invested over the last decade on behalf of the Principality’s future – its young people – include: developing teachers’ skills, expanding the use of digital technology in education, supporting pupils to make good, informed choices about their futures, looking after pupils with specific needs, developing educational, cultural and sporting activities for pupils, organising annual events to mark World Children’s Day, and ensuring support for families experiencing difficulties and for humanitarian associations.