On Thursday 9 November, for the seventh consecutive year, Le Temps Presse, supported by the Prince’s Government, took over the Variety Theatre in Monaco and the Sciences Po Paris Middle East and Mediterranean Campus in Menton. School pupils from Monaco and students from the Sciences Po Campus gathered in their groups to take part in the festival as members of the jury for the Children’s Prize and the Students’ Prize. 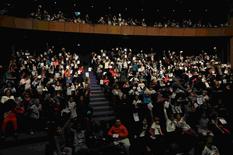 Le Temps Presse is part of a socially conscious cinema initiative, presenting short films from around the world which tackle issues relating to the 17 Sustainable Development Goals adopted by the United Nations. Each year, several prizes are awarded, including the Climate Prize, the Women’s Prize, the Students’ Prize and the Children’s Prize.

Early in the afternoon, 240 pupils from St Charles, Fontvieille and Révoires primary schools, as well as three classes from Collège Charles III, gathered at the Variety Theatre with festival founder and director Marc Oberon to vote for their favourite film from among five short features in competition for the Children’s Prize. Their votes will be added to those of 1,900 other children on the jury who attend schools in countries where Monaco’s Official Development Assistance is active, such as Burkina Faso, Burundi, Lebanon, Madagascar, Mali and Morocco.

In the evening, 120 first-year students from the Sciences Po Paris Campus in Menton watched the five films shortlisted for the Students’ Prize and chose their winner. As part of a partnership agreement signed in 2014 and renewed at the beginning of this academic year, the Department of International Cooperation and the Campus work together to raise students’ awareness of development issues and the fight against poverty throughout the world.

The festival prizes will be awarded on 4 January 2018 at Paris City Hall in the presence of a number of personalities who are committed to the cause.