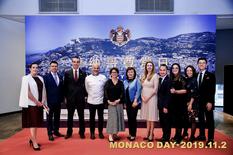 Monaco’s Embassy in China organised a Monaco Day in Beijing on 2 November. The event, held shortly before Monaco’s national holiday, brought together the Tourist and Convention Authority, the Monaco Economic Board and representatives from SBM and the Fairmont and Métropole hotels. Its aim was to promote the Principality to a selected audience.

The airline Air China, which introduced a direct service between Beijing and Nice this summer, and Sparkle Tour, a leading luxury travel company in China, partnered the event and invited their most prestigious clients to attend. Some one hundred special guests thus had the opportunity to hear presentations about Monaco’s economic and tourist appeal.

The evening concluded with a dinner given by Monaco’s Embassy in China, which called on the talent of chef Philippe Joannes from the Société des Bains de Mer, who travelled to Beijing especially for the event.