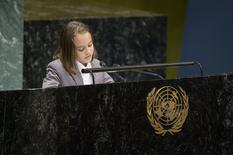 To mark the thirtieth anniversary of the adoption of the Convention on the Rights of the Child, the United Nations General Assembly held a high-level meeting on Wednesday 20 November, in which a number of children took part.

The voice of the Principality’s children was represented by Mayleen, a young Monegasque national aged nine, who noted that children’s rights were a priority for the Prince’s Government and lay at the heart of its international cooperation activities.

Mayleen emphasised how lucky she was to be a Monegasque citizen, which gave her an identity and access to a quality education, healthcare and security.

She expressed her hope that children all around the world would, like her, gain the right to live carefree and to simply be children.

The Monaco delegation joined the European Union declaration, alongside other member states including the Principality of Andorra and the Republic of San Marino, confirming its commitment to the Convention.