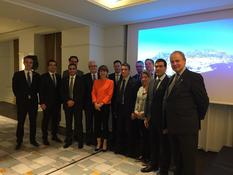 The founders of two start-ups from the Monaco Tech programme, Jade Aureglia (UrbanLab by Onhys) and Rachid Benchaouir (Coraliotech) also attended to present their projects.

A first panel discussion entitled "the city of the future" was an opportunity to publicise Monaco's proactive policy to promote a sustainable city, its ambitious eco-responsible approach and the country's energy security.  The Monegasque and Polish experts discussed the topics of sustainable urban development, smart cities, digital transition and green tourism.

At the second panel, in addition to the Principality's economic assets, the opportunities generated by new forms of innovation and technology, such as the blockchain, were presented.

This day gave rise to fruitful discussion between the speakers from both countries and made it possible to position the Principality at the forefront of technology, in particular via the deployment of the 5G mobile network, the first of its kind in the world at a national level.

An official dinner, attended by Polish political and economic figures, brought this promotional day to a close.