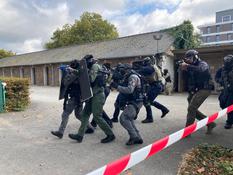 Two officers from the Monaco Police Department’s Protection, Surveillance and Intervention Group (GPSI) recently underwent training with the Search, Assistance, Intervention, Deterrence (RAID) unit in Rennes alongside around 30 elite police officers. The aim was to promote cooperation between eight different European intervention groups in the field of anti-terrorism through a series of practical exercises.

Over the course of two weeks, the groups shared their intervention protocols and techniques through simulated terrorist attacks on a variety of potential sites.

At the end of the course, they took part in a large-scale exercise where they had to deal with a group of terrorists who had taken refuge in an old, abandoned factory.

The GPSI has been participating in this training for two years with the cooperation of the French Department of International Security Cooperation and the RAID unit in Rennes.