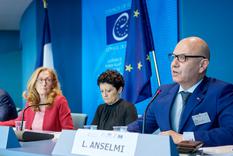 On 17 June 2019, Mr. Laurent Anselmi, Secretary of Justice, President of the Council of State, accompanied by a Delegation*, took part in a high-level conference in Strasbourg to mark the 20th anniversary of the Group of States against Corruption (GRECO), which currently has 49 Member States.

This Conference, held under the auspices of the French Presidency of the Committee of Ministers of the Council of Europe, brought together several European Ministers of Justice, including Nicole Belloubet, the French Minister of Justice, and Frans Timmermans, First Vice-President of the European Commission.

This anniversary was an opportunity to take stock of GRECO's achievements, assess the needs of its member States, anticipate the new challenges and risks of corruption and propose an anti-corruption programme.  This programme will guide the activities of the Council of Europe and GRECO within the framework of a pan-European centre for monitoring and expertise in the fight against corruption.

In his speech, Mr. Anselmi recalled the Monegasque authorities' constant commitment to combating corruption and their willingness to maintain the constructive dialogue begun in 2008 with GRECO, in order to implement the Recommendations issued by this Body during its various evaluation cycles, in compliance with the Principality's institutional and constitutional specificities.