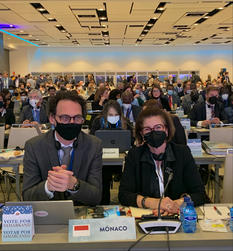 The Principality of Monaco took part in the 24th Session of the World Tourism Organization (UNWTO) from 30 November to 3 December 2021. The event was held at the UN organisation’s headquarters in Madrid. H.E. Ms Catherine Fautrier-Rousseau, Monaco’s Ambassador to Spain and Permanent Representative to the UNWTO, was accompanied to the meeting by Guy Antognelli, Managing Director of Tourism, and Isabelle Tello, Team Leader. The General Assembly brought together more than 1,000 delegates from 135 countries, including 84 tourism ministers.

Held over the course of several days, the meeting was devoted to analysing the post-pandemic situation of the sector, which is a strategic one for many countries, including the Principality, and to considering the development of a more inclusive and sustainable form of tourism.

The UNWTO Secretary-General presented his report to members, stressing the vital role played by the organisation, which has been able to bring together the stakeholders involved in global tourism to tackle the COVID-19 crisis, providing vital support for employment and businesses, and ensuring harmonised standards and protocols. The report also highlighted the action programme for a more inclusive and resilient future, concerning the growth of the sector in Africa between now and 2030, and the first International Code for the Protection of Tourists.

In the margins of the General Assembly, a thematic session opened by Spanish Prime Minister Pedro Sanchez covered a variety of issues relating to the development of the tourism sector under the theme “Building for the Future: Innovation, Education and Rural Development”. The General Assembly also designated the city of Samarkand (Uzbekistan) as the location for the organisation’s 25th Session in 2023.