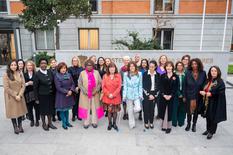 As part of the International Day for the Elimination of Violence Against Women, the Spanish Minister of Foreign Affairs, José Manuel Albares, decided to hold a working meeting, to which he invited all of the female ambassadors posted to Spain.

Spain is currently calling for a political commitment based on gender equality to move towards achieving the 2030 Agenda and the Sustainable Development Goals (SDGs).

Nearly 30 female ambassadors attended the working meeting alongside the Secretary of State for Foreign and Global Affairs.

It provided an opportunity for discussion on how policies are being implemented and what progress is being made on combating gender-based violence in each country.

Several participants highlighted the need for work on digital technologies to ensure that people can be taught how to use them and that they are accessible but above all controlled, as cases of abuse against women and girls and harassment on social media have increased substantially in recent years. While almost every country has means available to combat gender-based violence, the emergence of these new technologies has given rise to a new form of abuse, which must now be tackled.

There was also a focus on the urgent need to put in place better education and raise awareness about this issue in schools. Sexist behaviour and gender biases cannot be eliminated unless a new educational model is developed.

Finally, particular attention must be paid to violence associated with the impact of climate change and the extreme events it causes (natural disasters, climate migration, conflict over water resources, famine, etc.). The various studies carried out have unanimously shown that women and girls are and will continue to be the first to suffer the consequences.