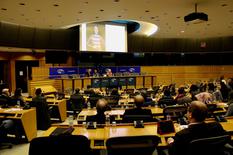 On Wednesday 6 February 2019, at the joint invitation of MEP Juan Ferrando Lopez-Aguilar and
H.E. Ms Sophie Thevenoux, Ambassador and Head of Monaco’s Permanent Representation to the European Union, representatives from European institutions and the diplomatic corps in Brussels attended a presentation delivered by Mr Thomas Fouilleron, Director of the Prince’s Palace Archives and Library, entitled “Building sovereignty: Monaco in European history (from the 13th to the 21st century)”.

Mr Fouilleron talked about the milestones in Monaco’s journey to becoming a sovereign state on the international stage, giving his audience a better insight into the particular features that characterise the Principality and its institutions.

Around fifty guests attended the event, which was followed by a cocktail reception hosted by Monaco’s Permanent Representation to the European Union.