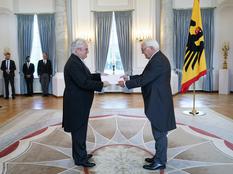 H.E. Mr Lorenzo Ravano, Monaco’s Ambassador to Germany, presented his credentials to H.E. Mr Frank-Walter Steinmeier, President of the Federal Republic, during a ceremony at the Schloss Bellevue in Berlin on Tuesday 21 June 2022.

In a private meeting held after the ceremony, the German President was keen to discuss the European context, particularly the conflict in Ukraine whose consequences are being felt at the global level. The new Ambassador recalled H.S.H. the Sovereign Prince’s condemnation of the military aggression against Ukraine and his appeal for a ceasefire and for respect for international law and the territorial integrity of States. He stressed that the Principality of Monaco systematically applied international sanctions and, on humanitarian issues, noted the chain of solidarity that has been put in place by the Monaco Red Cross and civil society in the Principality, in the form of both sending emergency equipment and hosting several Ukrainian families in Monaco.

President Steinmeier also welcomed H.S.H. the Sovereign Prince’s commitment to protecting the environment and conserving the oceans. On this subject, H.E. Mr Lorenzo Ravano noted the debate and exhibition “Northbound – Connected by the Sea”, which were held in Monaco in May to highlight the Frisian culture and the commonalities between the Mediterranean and the North Sea. Mr Ravano also noted H.S.H. the Prince’s forthcoming participation in the 15th International Coral Reef Symposium in Bremen.

Finally, the President and the Ambassador discussed their wish to strengthen bilateral relations and cooperation between the two countries in the areas of diplomacy, the economy and culture. H.E. Mr Lorenzo Ravano was able to share with the President of the Federal Republic of Germany potential synergies, notably in terms of public policies on the digital transition introduced in the Principality through the Extended Monaco programme, and the festivities associated with the fiftieth anniversary of the founding of the Monaco International German Club in 2023.

H.E. Mr Lorenzo Ravano is the seventh Ambassador of the Principality of Monaco to the Federal Republic of Germany.