Monaco takes part in Conference of Parties to Council of Europe Convention No. 198 Strasbourg – 21 and 22 November 2017 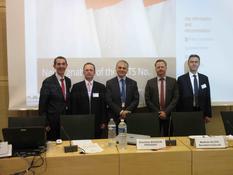 On 1 September 2017, in Strasbourg, Monaco’s Ambassador to the Council of Europe, Rémi Mortier, signed Convention No. 198 on Laundering, Search, Seizure and Confiscation of the Proceeds from Crime and on the Financing of Terrorism, known as the Warsaw Convention.

The instrument was opened for signature in 2005 and entered into force on 1 May 2008. It is considered to be one of the key treaties of the Council of Europe. It is the first comprehensive international treaty, since it covers prevention and suppression of money laundering and terrorist financing, and provides for international cooperation in these areas.

In signing the Convention, Monaco joins 41 other signatories, all members of the Council, which has a total membership of 47 nations. Monaco must now ratify the agreement. This will mean that the Principality will have a legal obligation to apply the provisions of the Convention within its borders. To date, 33 states have ratified the agreement.

Prior to ratification, bill number 972, which strengthens the mechanism for combatting money laundering, terrorist financing and corruption and was submitted by the Government to the National Council on 9 November, will need to be adopted. The bill seeks to implement in the Principality the new provisions of the European Union’s fourth money laundering directive (2015/849, dated 20 May 2015), as well as numerous recommendations proposed by MONEYVAL and the Group of States against Corruption (GRECO).

Following signature of this treaty, the Conference of the Parties to Convention No. 198 invited Monaco to send an expert to observe its work. The Conference is responsible for monitoring and following up implementation of the Convention by the parties, training rapporteurs, and taking action to raise awareness of the fight against money laundering and terrorist financing.

During the most recent Conference held in Strasbourg on 21 and 22 November, the Principality was represented by SICCFIN official Jean-Marc Gualandi.

Since this was Monaco’s first time participating in the Conference of the Parties, H.E. Mr Rémi Mortier also attended.

Mr Mortier and Mr Gualandi were warmly welcomed by the Chairman of the Conference, Branislav Bohacik, and by the Executive Secretary, Matthias Kloth.