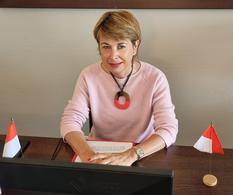 On 8 June, Isabelle BERRO-AMADEÏ, Minister of Foreign Affairs and Cooperation, took part via videoconference in the Mediterranean Ministerial Dialogue on the Food Security Crisis, organised at the initiative of the Italian Government.

Russia’s invasion of Ukraine has led to a spike in food prices, which has further undermined global food security, after it was already feeling the impact of climate change and the COVID-19 pandemic.

The aim of the dialogue, which brought together ministers from the Mediterranean region and officials from UN agencies with responsibility for these issues, was therefore to identify the most appropriate medium- and long-term measures to tackle food insecurity in the region and offer support to the most vulnerable countries.

The Minister noted the United Nations initiatives that the Principality is involved with and called for an immediate lifting of the blockade of Black Sea ports to enable the export of Ukrainian grain.

Isabelle BERRO-AMADEÏ also explained that Monaco had made food security a priority of its international cooperation, and was devoting nearly a third of its official development assistance to this issue. The Principality maintains a firm, long-term commitment to tackling malnutrition, supporting local producers and developing sustainable agriculture.

The Minister concluded by noting that Monaco intended to join the international community’s efforts to avoid a global food crisis.