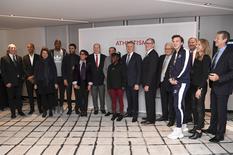 On Friday 22 November, in the presence of H.S.H. the Sovereign Prince, the organisers of the EBS Herculis Athletics Meeting celebrated the successful Monaco Run and Herculis 2019 Meeting, which were crowned by the achievement of three world records.

In his speech, Meeting Director Jean-Pierre Schoebel first recalled the outstanding performances seen during the new-format Monaco Run on Port Hercule on 16 and 17 February. For the first time, the event hosted a 5K road race, in which Julian Wanders (13:29) and Sifan Hassan (14:44) smashed the men’s and women’s world records for the distance.

It was then time for the Herculis EBS meeting on 12 July to take the spotlight. Jean-Pierre Schoebel ran through the many highlights and the amazing results achieved on the track at the Louis II Stadium. The huge number of spectators attending the event was once again notable and no doubt contributed to the unbelievable performance delivered by Sifan Hassan in the Brave Like Gabe Mile, culminating in a world record of 4:12.33.

A great crowd gathered for this wonderful occasion, including Christian Taylor, Renaud Lavillenie, Steven Gardiner and Karsten Warholm, as well as former stars from the world of athletics. The evening concluded with a large family photograph including the Sovereign Prince, who is President of the Federation.

In 2020, Monaco Run will be held on 15 and 16 February, and the Herculis EBS Meeting on Friday 10 July at the Louis II Stadium.