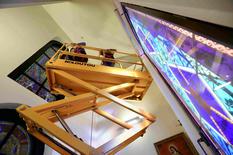 The Chapelle des Carmes (Carmelite Chapel), which was rebuilt in 2002, is situated on the Boulevard d'Italie. It has the special feature of incorporating stained glass windows from the previous chapel, which date from the early 20th century.

In the sacristy, four stained glass windows, two of which are of great importance (Our Lady of Laghet and Our Lady of La Salette), were obscured by a lack of light. Several methods were tried to show their true beauty and restore their sparkle, without success. After various tests, the Monegasque company Vertex, which specialises in the field of industrial electronics and professional display screens, designed a bespoke solution based on the latest technology.

A totally separate fireproof box, fixed to the wall with no direct contact with the stained glass windows, prevents any light leakage. It is comprised of two parts, one fixed, the other removable for maintenance. Several types of LEDs are used to reproduce sunlight, with a colour value that is as close to natural as possible. The intensity of light can be adjusted via a remote control or with a smartphone or tablet that uses an IOS- and Android-compatible Bluetooth module.