Newton Riviera, the new exhibition presented by the Nouveau Musée National de Monaco at Villa Sauber, takes a fresh approach to exploring the work of a major twentieth-century photographer, Helmut Newton, through 280 photographs, some well-known and others rarely displayed in public.

The exhibition’s title is a reminder that the French Riviera was a place of inspiration for Helmut Newton, a location he photographed from the 1960s until his death in the early 2000s.

“I love the sunshine. We don’t see it in Paris any more,” he allegedly told the Monegasque official in charge of processing his paperwork. It was 1981. Newton was 61 years old, and had established himself as one of the greatest fashion photographers of his generation. So it is not surprising, through these images, to discover a dazzling Newton taking an ironic yet fascinated look at an easy, elegant way of life, a world of appearances and superficiality, in which he was both a player and a privileged spectator.

His time in Monaco, from 1981 until his death in 2004, was one of the most prolific and most liberated periods of his career. Monaco offered Newton a unique setting for his fashion photography. It was not unusual for one of the city’s construction sites to serve as a backdrop for a campaign he was shooting for a luxury fashion house.

It was also in Monaco that he took many photographs and portraits of the royal family, the “beautiful people” and the stars of the Ballets de Monte-Carlo. And it was in Monaco that he finally tried his hand at landscape photography, a genre that he had not previously explored, and developed one of his most personal series of works, “Yellow Press”, featuring strange, disturbingly glamorous images inspired by crime scenes. 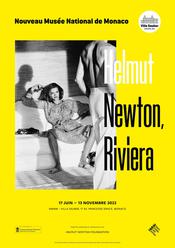