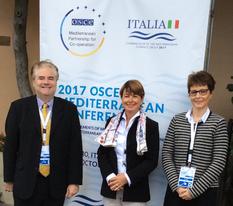 From left to right : Mr. Lorenzo Ravano, First Counsellor at the Embassy of Monaco in Berlin ; H.E. Ms Isabelle Berro-Amadeï, Ambassador, Permanent Representative of Monaco to the OSCE and Ms. Marie-Noëlle Albertini, Diplomatic Adviser to the Minister of Foreign Affairs and Cooperation ©DR

At the invitation of the Italian Government, which this year is chairing the Mediterranean Contact Group of the Organization for Security and Cooperation in Europe (OSCE), a Monegasque delegation, headed by H.E. Ms Isabelle Berro-Amadeï, Ambassador, Permanent Representative of Monaco to the OSCE, and comprised of Ms. Marie-Noëlle Albertini, Diplomatic Adviser to the Minister of Foreign Affairs and Cooperation and Mr. Lorenzo Ravano, First Counsellor at the Embassy of Monaco in Berlin, took part in the OSCE's Mediterranean Conference in Palermo on 24 and 25 October 2017, on the theme of "Mass Displacement of Migrants and Refugees:  Challenges and Opportunities."

The Conference was held in connection with the preparation of a Global Pact on Refugees and a Global Pact for Safe, Orderly and Regular Migration, which will be submitted to the 73rd session of the United Nations General Assembly (UNGA) for approval in September 2018.  These pacts will follow on from the commitment made in the 2016 New York Declaration on Refugees and Migrants and will represent a political commitment to global cooperation on the issue of human mobility.

In addition, the 2017 Mediterranean Conference concurs with the 2030 Agenda for Sustainable Development, adopted by the UNGA in 2015, in several respects, with regard to global, cross-cutting issues, notably target 7 of SDG 10, to "facilitate orderly, safe, and responsible migration and mobility of people, including through the implementation of planned and well-managed migration policies."

This high-level political segment, which was opened by the Foreign Minister of Italy, Angelino Alfano, the Secretary General of the Austrian Ministry of Foreign Affairs, Michael Linhart and the Secretary General of the OSCE, Thomas Greminger, focused on strengthening security and promoting international and regional cooperation to address current issues and challenges.

Three sessions were held on risks incurred, the protection of migrants and opportunities resulting from migration, as well as integration policies in host countries.

In her speech, H.E. Ms. Berro-Amadeï stressed Monaco's particular interest in these issues of major importance for its foreign policy, as expressed in its support for dialogue and cooperation to protect the most vulnerable people and through action to ensure that their rights are protected.

She also recalled that Monaco is actively helping to improve the plight of these people in the context of migration.

She welcomed the role of the OSCE in this area as a platform for debate and discussion to address these topical issues.