Ocean thermal energy loops now being rolled out in Principality 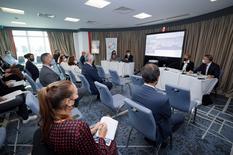 A press conference was held on Friday 22 October 2021 to provide an update on the roll-out of ocean thermal energy loops in the Principality’s Condamine and Larvotto districts.

The press briefing was attended by Ms Céline Caron-Dagioni, Minister of Public Works, the Environment and Urban Development, and Mr Thomas Battaglione, CEO of SMEG, representing the Monegasque group seaWergie, which holds the public service concession for installing and operating the ocean thermal energy loops.

Coming a year after the concession agreement was signed, the briefing comprised a presentation setting out project milestones, and the signature of the National Energy Transition Pact by seaWergie.

The energy consumed by buildings is responsible for 35% of Monaco’s greenhouse gas emissions. This is a significant figure in terms of the Principality’s CO2 emissions goals: the country is targeting a 55% reduction by 2030 and carbon neutrality by 2050.

With this in mind, the Government is promoting and organising the phasing out of fossil fuels used to heat the Principality’s buildings. The roll-out of two new ocean thermal energy loops, which offer an alternative to fuel oil (to be banned from 1 January 2022), is at the heart of this strategy, and the State is investing more than €60 million in the project.

An initial part of the Condamine loop is already in place, serving a first building, the Winch, which has been a seaWergie client since July.

The next step is a significant one: the connection of the Administrative Centre, which is scheduled for 8 November.

In Larvotto, the primary infrastructure for the loop has been completed and the first sub-station, serving the shops in the new Larvotto resort area, has been operational since 1 July.

The concession holder is working with co-owned buildings and their managing agents. Priority is being given to buildings that currently use fuel oil for their heating; by connecting to the loop, they will wipe out their greenhouse gas emissions.

This forward-looking solution has already won over a number of co-owned buildings, several of which have approved connection to the ocean thermal energy loop via their general meetings, and even begun the work to make the shift. Some construction projects are also opting for this clean choice, as are public building works (including the Testimonio II project), which have integrated this element since the design stage.

It is worth noting that the goal shared by seaWergie is to have 29 buildings connected by 2024, achieving a 7% reduction in the Principality’s total greenhouse gas emissions, a saving of 6,000 tonnes of CO2 per year.

Finally, it should be emphasised that Monaco was one of the first countries to develop this type of energy, also known as “marine thermal energy”, along its coastline and that the impact on the marine ecosystem is zero.

Ocean thermal energy loops recover heat energy from the sea to supply buildings with heating and cooling. In other words, the temperature of seawater is used to provide heat and air conditioning.

seaWergie is the public service concession holder responsible for installing and operating ocean thermal energy networks in La Condamine and Larvotto. The public service contract has been granted for 30 years to this specialist company, in which the majority of shares are held by SMEG, with the remaining 49% split between the State, SOGET and MES.

At the wetransfer link below, you will find royalty-free images of the press conference on 22 October and the ocean thermal energy loop technical facilities - © Government Communication Department / Mika Alesi: