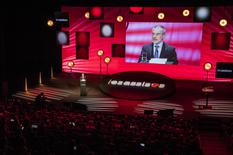 The 19th Assises de la Sécurité – an unmissable event for cybersecurity experts – opened in Monaco this morning with a speech by Patrice Cellario, Minister of the Interior, followed by the opening lecture given by Guillaume Poupard, Director General of the French National Cybersecurity Agency (ANSSI).

With nearly 3,000 visitors expected to attend, including 160 partners representing the major technology trends in the sector, the Assises 2019 will give professionals an opportunity to network and discuss cyber issues over the course of three days. The major topics to be addressed include cyber threat intelligence (CTI) and the cloud, with questions relating to data integrity and sovereignty.

Patrice Cellario was keen to emphasise the importance for the Principality of being at the cutting edge of cybersecurity, equipped to make a success of the digital transition: “Today, the Principality has finalised the legal, legislative, regulatory and technical framework for a secure digital transition in accordance with commonly agreed standards (comparable to those in France and Europe) [...] In this context and this environment, the Principality of Monaco wants to set an example as a nation that is changing, adapting and modernising.”